Arnold Palmer's magnificent golf performance record, magnetic personality and unfailing sense of kindness to everybody with whom he came in contact with endeared him to millions throughout the world.

It Started With A Dream, To Play The Game With Unmatched Perfection

Arnold Palmer's popularity and success grew with the tremendous television and golf boom in the latter half of the 20th Century to unimaginable heights.

His springboard to professional fame and fortune was his victory in the U.S. Amateur Championship in 1954. He turned professional a few months later.

His hottest period was a four-year stretch from 1960 to 1963 when he landed 29 of his titles and collected almost $400,000 at a time when the purses were minute by today's standards. He was named "Athlete of the Decade" for the 1960s in a national Associated Press poll. Before, during and after that great decade, the famous golfer amassed 92 championships in professional competition of national or international stature. Sixty-two of the victories came on the U.S. PGA Tour, starting with the 1955 Canadian Open.

Seven of his victories came in what the golfing world considers the four major professional championships. He won the Masters Tournament four times, in 1958, 1960, 1962 and 1964; the U.S. Open in spectacular fashion in 1960 at Cherry Hills Country Club in Denver and the British Open in 1961 and 1962. He came from seven strokes off the pace in the final round in that U.S. Open win and finished second in four other Opens after that. Among the majors, only the PGA Championship eluded him. He finished second in the PGA three times.

Learn More
"The most rewarding things you do in life are often the ones that look like they cannot be done."

THIS BOOK IS PALMER AT HIS BEST GRACIOUS, FAIR, AND A TRUE GENTLEMAN.

A TREASURE TROVE OF ENTERTAINING ANECDOTES AND TIMELESS WISDOM, FROM ON AND OFF THE COURSE

World-famous golfer, successful business executive, devoted family patriarch. He's a man with a down-to-earth common touch that has made him one of the most popular and accessible sports figures in history.

Get your copy of the NY Times Best seller A Life Well Played from Shop Arnold Palmer, Amazon or Barnes & Noble. 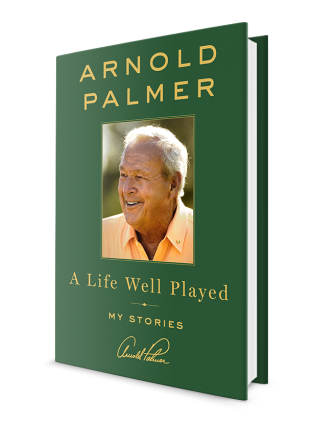 From his stellar career in golf to receiving the United States of America's highest civilian honor, Arnold Palmer's life is a testament to the American dream.